A Huge but Gentle Guard Dog who Loves Children 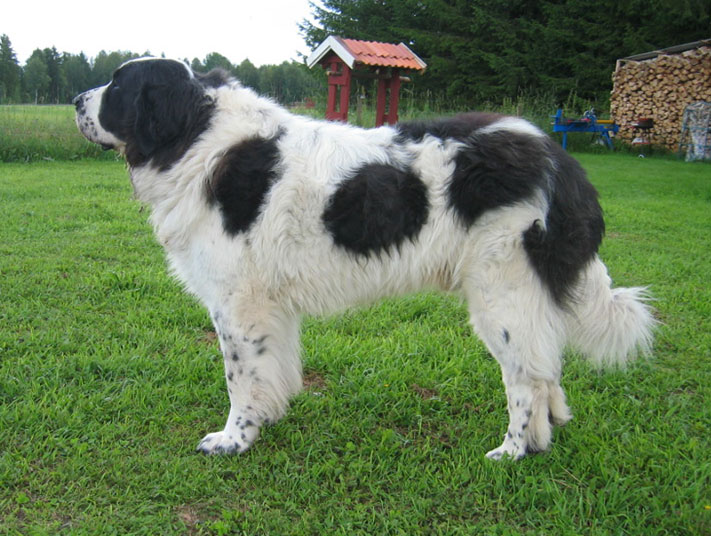 Weighing in at up to a whopping 220 pounds, the Pyrenean Mastiff can be an imposing presence! If not for such a sweet disposition, this dog would be intimidating. However, as a defender of its flock since the Middle Ages, this dog still instinctively will guard your family, most especially your small children, whom it will protect with its life. A quiet, docile, very large and independent dog, it will need the leadership of a strong, dominant but affectionate owner to earn its allegiance to your expectations.

History
The Pyrenean Mastiff has been around for centuries, since at least the Medieval period. At that time, Muslims inhabited the south of the Iberian Peninsula while the Christians settled in the north. It was here, near the Pyrenees Mountains, that the Pyrenean Mastiff was born.

During this era, two kingdoms in what are now Aragon and Castilla were breeding two different kinds of dogs: the Spanish Mastiff in Castilla, and the Pyrenean Mastiff in Aragon. The latter had a big job to do, because sheep, the "cash crop" of the time, were susceptible to incredibly dangerous and clever predators such as bears and wolves. Like its ancestors, the Navarra and Catalina Mastiffs, who were also great protectors of castles, farms, and private homes, the Pyrenean Mastiff proved to be up to the task – a role which encouraged the development of its independent personality. Because it was literally responsible for defending large flocks of sheep over what could be many thousands of miles, the fearless yet ironically serene Pyrenean Mastiff was a valiant, self-reliant success.

In the early part of the 20th century, however, there was a sharp decline in the number of predators, which had the residual effect of eliminating the need for the breed’s defense. Because of the dogs’ very large size and significant food needs, poor farmers could no longer afford to keep them. This was especially true after the Spanish Civil War. Formal breeding programs were stopped, and the Pyrenean Mastiff was threatened with extinction. However, in the latter part of the 20th century, enthusiasts began to hunt for survivors of the breed to reestablish its existence. Listed as a modern Spanish purebred by Club del Mastín del Pirineo de España since 1977, and recognized by the Fédération Cynologique Internationale since 1982, it is now also highly regarded and recognized by the United States' Pyrenean Mastiff Club of America who hope to someday increase its popularity in North America.

Appearance
The Pyrenean Mastiff is a huge dog, standing as tall as 32 inches at the shoulder and weighing up to 220 pounds. The dense, weatherproof coat is white and heavy, with large, dark spots. As with other Mastiffs, this dog is a drooler, something which a loving owner will find endearing.

Temperament
Despite its massive size, this lovely pet is very independent without being willful, and is extremely gentle, especially with children. It also gets along quite well with other animals in the home, particularly if they, too, are part of the "family" or "flock," thereby fulfilling the Pyrenean Mastiff's instinct to protect those in its care.

This gentle giant is incredibly sweet-tempered, but will not hesitate to defend if challenged. Because of this, it also makes a superb guard dog. Usually quiet, this dog will only bark to alert its family to the presence of strangers and possible imminent danger.

Although the Pyrenean Mastiff is remarkably meek, this dog still needs a dominant owner simply because discipline must be key; with a dog that can grow to 220 pounds, you don't want any sort of undesirable behavior at all! Instill respect for your rules in this already naturally self-assured, very intelligent pet by providing gentle, loving, firm guidance, and a clear sense of leadership. As long as you do this, and as long as you function as the true pack leader, you'll have no trouble controlling your exceedingly docile and sweet pet. Use disciplinary techniques that rely on rewards and positive praise, never resorting to physical punishment or even a harsh tone of voice. This dog responds best to your friendship, rather than your dictatorship.

It's important to note that even though your pet is a naturally well-behaved, obedient dog, it's in its nature to remain somewhat suspicious of both strange people and strange animals. Socialization will give your puppy the necessary experience it needs to be comfortable around strangers in a variety of situations, but expect that a certain amount of wary skepticism will remain. This is normal.

Environment
The Pyrenean Mastiff is a working dog. Your pet will need to be exercised, or it may become restless if not given at least a daily walk, preferably two or three times a day. This breed is relatively "low energy" which means it will not be particularly rambunctious after puppyhood. However, as with many large dogs, maturity may not occur until the dog is at least two years old, so be prepared for a long youthful phase. This dog is an ideal pet in family situations with children, but is also perfect in quiet environments with a single devoted owner, as long as it is given plenty of love and attention.

Health
The Pyrenean Mastiff lives quite a long life for such a large dog, between 8 and 13 years. Your pet will be prone to other "large dog" disorders like hip dysplasia and bloat. The latter can be especially dangerous and can be fatal literally within an hour. If symptoms of digestive discomfort appear such as a hard or distended stomach, trying to vomit unsuccessfully, or signs of depression, take your dog to a vet immediately. Surgery is usually the best and most effective cure. Bloat can be avoided with smaller meals and limiting strenuous activity immediately after eating.

Grooming
Your pet has a relatively long coat and needs regular combing and brushing. It is a shedder, but shedding will be lessened if brushing and combing is done on a regular basis. Ears should be kept dry and clean and the eyes, too, should be gently cleaned with a moist cloth.