Find Komondor Puppies For Sale on Pets4You.com. Also known as the Hungarian Sheepdog, the Komondor is a massive dog with a proud gait. Their body is totally covered with an extraordinary felted and corded coat which is 8-11" long and always white. The coat helps them blend in with the sheep. They are serious, confident, commanding and highly protective of their family, house, car and livestock. Because they guard against wolves and bears, they must be socialized early. These dogs need complete and firm obedience training by an experienced owner. They are good with children when raised with them from puppy hood. They need lots of exercise. Never brush or comb the coat. It is divided into cords and trimmed. These dogs need lots of bathing and take a long time to dry. Komondors weigh up to 125 lbs. and stand 25 1/2" and up at the shoulders. Contact the dog breeders below for Komondor Puppies For Sale. 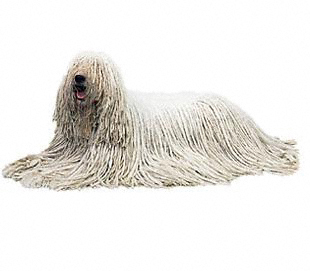 The Komondor is an ancient dog that originated during the 12th or 13th century. The breed was brought to Hungary by Turkish-speaking, nomadic people called the Cumans who settled there. The dog descends from a Tibetan species that accompanied the Cumans when they were forced to move westward from their original homeland close to the Yellow River. This was a result of territorial expansion by the Mongols in the late 900s. The Cumans and the Komondor dog settled in Hungary in 1239; Komondor remains have been found in their masters' graves. The name Komondor originates from "quman-dur," which means "dog of the Cumans," or "belonged to the Cumans." This distinguished them from a similar Hungarian breed of sheep dog, which was later combined with the Komondor. In 1544, the name Komondor was found in the Kákonyi Péter book, History of King Astiagis. The Komondor is common today in its homeland of Hungary, although many of the breed were killed during World War II when the Germans and Russians invaded Hungary. In order to attack the houses and farms of the land, soldiers were required to slay the dogs who fiercely were defended their territory.

Not to be confused with the Puli, a dog also from Hungary and cloaked in dreadlocks as well, the Komondor which is relatively rare in America, has been a member of the AKC’s Working Group since 1937. The plural of the word Komondor is Komondorok.

Appearance
The Komondor's long, corded coat makes it look like a "mop on four legs." However, this is a fearless dog famous for its loyalty and devotion as a family pet. The Komondor was originally bred to guard livestock. In the breed's homeland of Hungary, the Komondor is still used often for this purpose.

Large and imposing, this gentle giant stands at least 25.5 inches tall at the shoulders, with an average height of 27.5 (females) to 31.5 (males) inches at the shoulder and a weight of 88 to 132 pounds. The coat is always long, shaggy, felted and white. There is a purpose to this. Historically, the Komondor's appearance has allowed it to blend in with the sheep it protects, surprising any predators. The coat is also protective against inclement weather and prevents fatal injury from any prey it may fight.

Temperament
In addition to being an excellent guard dog, this lovely canine has a personality that one can't help but adore. Independent, highly protective and intelligent, this pet wants to watch over you – and you can certainly trust it to do so. Just be aware that with a dog this vigilant, it may stare at you as you go about your day. Don't be nonplussed, since this simply means your dog is doing its job. In fact, this is something your pet is born to do, and it is happiest when "working" in this manner.

As unnerving as it may be, you can expect this dog to spring into action at a moment's notice. Typically, it will sleep during the day and be a watchful guard dog at night. You certainly have nothing to fear with your family pet around!

This is not a dog for a novice dog owner. Rather, a dog of this intellectual stature and physical fortitude requires the guidance of a strong, confident leader who commands respect from this animal, one whom the dog can rely on to provide consistent rules with which to conform.

That said, make sure you socialize your puppy early so that this independent and intelligent dog listens to you. Komondors are bred to be largely independent, so you'll have to make sure to socialize your puppy to respond to your commands – which it certainly will, since this breed is so affectionate and intelligent – from an early age. Puppy obedience classes are ideal for this breed, provided your pet's vaccinations are up to date before doing so. Start training early – 10 to 12 weeks of age at the latest. Certainly don't wait until your lovely pet is six months old to start. If you do, you may continue to have problems with a dog that can be inappropriately aggressive toward strangers it doesn’t know, including other dogs.

It's also important to introduce the Komondor to people you will have in your home a lot (but who are not part of your immediate family, in that your pet will not be protecting them "full time"), because Komondors can be territorial unless they know people well. Once your pet is taught to accept someone as part of the family, though, that's exactly who that person becomes – and your pet will be just as protective of close family and friends as it is of you.

Finally, it's wise to check to make sure your new pet can tolerate other dogs. This breed is simply instinctively aggressive toward other dogs although it can sometimes be taught to accept them. Surprisingly, Komondors get along very well with cats and of course with livestock if you live on a ranch or farm.

Your dog is so smart that if it is not sure of strangers, it will not resort to immediate aggression. Komondors tend to give strangers they don’t know well the benefit of the doubt. You shouldn't have to worry about your dog being overly aggressive unless there really is a reason to do so.

Health
The Komondor is a generally healthy dog, but can be subject to a dangerous condition called bloat. If you see symptoms of depression, lethargy, trying to vomit and failing – and/or a hard, distended stomach, consult your veterinarian immediately. Surgery is usually recommended.

Komondors can also suffer from the usual canine problems of hip dysplasia, juvenile cataracts, and a deformity of the eyelid known as entropion. Make sure to keep your pet at a healthy weight throughout its life, as it can be prone to weight gain especially as it gets older. Life expectancy for this breed is about 10 to 12 years, quite good for a larger dog. Keep your pet active with lots of exercise to help it stay healthy in later years.

Grooming
This is one breed where grooming isn't a breeze. The corded fur cannot be brushed and combed and instead should be divided into cords and trimmed as needed. Frequent bathing is also necessary since your pet can develop a doggy odor, and fur will take a long time to dry. The good news? Your dog sheds very little.

References
AKC Meet the Breeds®: Get to know the Komondor.
https://www.akc.org/breeds/komondor/index.cfm.
Retrieved July 22, 2014.

Living Area
The Komondor is a hearty breed and will do best if it lives in an area or circumstance that allows it to be out of doors. This breed loves to run and exercise itself and having space to do so will add to animal's quality of life. However, the breed can do well in apartment dwellings too as long as it is given enough time and opportunity to exercise outside. The Komondor is very well suited to different climates. It will do fine in high heat climates and it will do equally well in cooler climates. Unlike many breeds that are better suited to living indoors, the Komondor can live out of the home if needed. This should only be done if the outside portion that it will live in is securely fenced and gated. Remember, this is an instinctive guard dog and it will go after what it feels is a threat to the owner or to the owner's property.