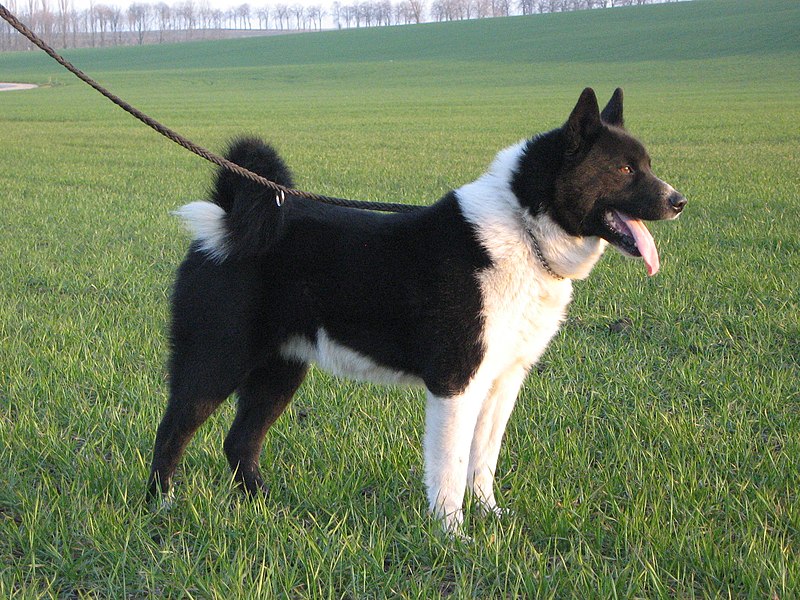 Find Karelian Bear Dog Puppies For Sale on Pets4You.com. This breed originated near the borders of Russia and Finland, where farmers use it to hunt a variety of game. The Karelian Bear's short, thick coat is in all-black or black with white markings. It can weigh up to 65 pounds and measure 24 inches in height . It is not recommended as a house dog or for life in a city setting, as it requires a lot of open space to roam. These dogs have a good sense of humor and are sensitive, independent, intelligent and energetic. They are very loyal and make good companions and watchdogs. Persistent and powerful, an owner must be capable of handling these dogs. Proper training and socialization are absolute musts. Bear Dogs have small appetites for their size. Exercise at least one hour a day or they tend to become destructive. Grooming needs are minimal. Like other Artic dogs, they have no doggie odor. These dogs weigh 44 to 50 lbs. and stand 19 to 23" at the shoulders. Contact the dog breeders below for Karelian Bear Dog Puppies For Sale.

A Tough Hunter who Needs a Dominant Owner,
This Fearless, Medium-Sized Dog Will Give Its Life to Save Yours

Karelian Bear Dog: Sensitive, Independent, Intelligent, and Brave, with a Sense of Humor.

The Karelian Bear Dog is a natural hunter with an impressive history, in that it used to hunt bears. Also known as "Karjalankarhukoira" or KBD, the breed is several thousand years old and originally comes from an area in northern Europe called Karelia, which is now an area divided between Finland and Russia.

In addition to hunting bears, the Karelian Bear Dog was also used to hunt lynx, elk, moose, and a variety of other large game. Even the wild boar didn't frighten the Karelian Bear Dog. Its strategy was to use its loud, intimidating bark to keep animals at bay while awaiting arrival of its human companions who would assume the responsibility of the capture or the kill.

History
First shown in Helsinki at a dog show in 1936, the Karelian Bear Dog became nearly extinct following World War II. With a few specimens left, the Finnish Kennel Club worked to restore the breed. It was ultimately recognized by the FCI in 1945 and by the United Kennel Club in 1996. It's not yet registered with the American Kennel Club, but it is recorded in its Foundation Stock Service, the first step to full registration. In its native country of Finland, it's considered a national breed and one of the most popular – in fact, within the top 10. The modern breed has its roots in the stock saved after World War II. Today, it's commonly bred in the European countries and in North America. It is still used for biggame hunting in Finland.

Appearance
For all its fierce determination and ability to take down big game, the Karelian Bear Dog is a relatively small dog, weighing only 44 to 50 pounds in adulthood and standing 19 to 23 inches at the shoulder. Its small ears point outward slightly and are cocked. Thick, dense usually black and white fur covers a sturdy body. The expression is usually focused and intense; the tail is curled uniquely, making the breed easy to identify. The Karelian Bear Dog has a large head and small, intense eyes; its body is not as tall as it is long, with a neck that is muscular and arched along with a strong back. The Karelian Bear Dog can also have a stub tail or natural bobtail in addition to the curled variation.

If you are a pet owner who loves the outdoors and likes to work hard, this is a pet who will keep pace with you and be very affectionate – again, as long as you know how to stay in charge. Fierce and extremely protective, your beloved pet will have no qualms whatsoever about sacrificing its life for yours. Strangers may be treated with some aloofness until the Karelian Bear Dog gets to know them, at which time it will be just as affable with them as with family.

A note about the Karelian Bear Dog’s attitude toward other dogs: It is important to socialize your puppy very carefully as soon as you bring it home to control its tendency to exhibit strong aggression toward other dogs. Not an option, but rather a requirement, socializing this breed is critical since this dog can be hard to control if you don't. In addition, the Karelian Bear Dog is very energetic and needs a lot of exercise and mental stimulation – typical of the "Hunter" mentality – to be truly well-behaved.

Finally, this is not a dog to keep in the house with small pets. Small animals and even other domestic pets like cats can be in danger from your pet simply because of the strong prey drive. However, you'll find no better guard dog – the Karelian Bear Dog is easily capable of protecting you from a danger 10 times its size – and again, is utterly willing to give its life to save yours.

Don't adopt the Karelian Bear Dog if you have small children; wait until they are older. Interestingly, this independent dog can still experience separation anxiety, so make sure that you reassure your dog when you are going to be gone and spend as much time as possible as its companion.

Proper environment
An apartment is not suitable for the Karelian Bear Dog, as it needs a lot of room to exercise and is very active. Your pet will be very unhappy if confined to small spaces. Ideally, you should have some acreage and a fence so that your pet can roam freely.

Health
The Karelian Bear Dog has few health problems and is a very hardy breed, with a life expectancy of between 10 and 13 years on average.