Find Catahoula Leopard Dog Puppies For Sale on Pets4You.com. Also known as the Catahoula Hog Dog, these dogs are descended from war dogs brought by the Spaniards to the New World and from dogs owned by Native Americans. By 1979 they were designated the State Dog of Louisiana. The "leopard" in their name refers to the mottled spots on their coat. At one time "Cats" were used to round up feral pigs and cattle that had escaped captivity and were living in woods and swamps. Catahoulas weigh between 60 and 75 lbs. and stand approximately 24 inches tall. They are easily trained, although you must be in charge. Coat colors are merle to any color. Contact the dog breeders below for Catahoula Leopard Dog Puppies For Sale. 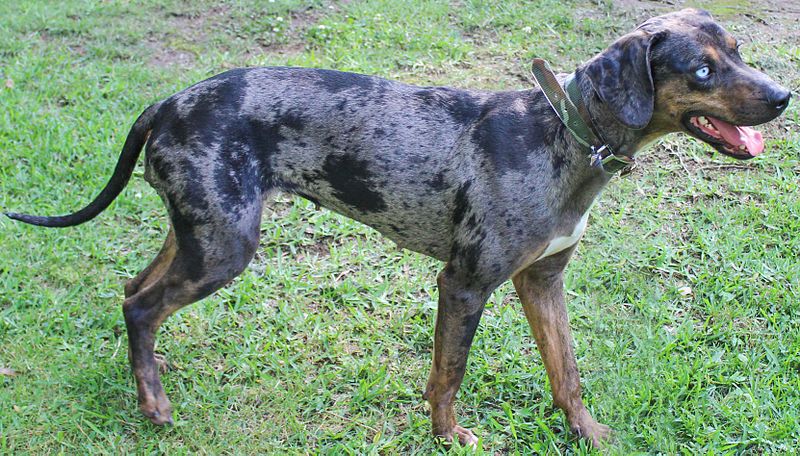 It's not quite known how the Catahoula Leopard dog came to be, but it is suspected that this faithful family dog was bred from a combination of Mastiffs , Bloodhounds , and Greyhounds brought to the area by Spanish explorers with local Indian dogs in northern Louisiana. It is not known whether Native Americans bred their dogs with those brought to the area by Hernando Desoto in the 16th century, or were "created" later in the 19th century by French settlers. The word "Catahoula" may either be a French derivation of the Choctaw Indian word "Couthaougoula," or a combination of the Choctaw words for "lake" ("okhata") and "beloved" or "sacred" ("hullo"). The Catahoula Leopard dog is today the state dog of Louisiana and has become a prized family pet for many.

History
Hernando Desoto, the Spanish explorer, landed in Florida in 1539 and saw that there was only one native dog, the treasured companion of the indigenous Native Americans. He described this dog as looking exactly like a wolf that barked rather than howled. Desoto’s own dogs (the aforementioned mastiffs, greyhounds and bloodhounds) were war dogs. These dogs were crossbred with the native Indians' dogs, producing a new breed that became the Catahoula Leopard dog.

Swine and the Catahoula Leopard Dog
One of the important things in the Catahoula Leopard dog's history is its work experience. Desoto and his men brought pigs with them from Santo Domingo and Cuba, specifically to be an emergency food supply. They were not killed on a regular basis to be used as a daily food supply, but instead were meant only to be emergency rations. Desoto's dogs were critical to the pigs' survival, using their herding instincts to keep them protected from prey.

By the time Desoto died three years after the expedition began, the 300 head of hogs the party had brought with them had swelled to extreme numbers. Only one time during Desoto's command were these hogs used as food supply, and upon his death, 700 head of hogs belonging specifically to Desoto (with only 13 sows recorded as his pigs at the beginning of the expedition) were auctioned off. When the expedition finally ended in the northern Louisiana/Southern Arkansas region, it's a nod to the party's efficiency (and to the Catahoula Leopard dogs' herding skills) that the vast number of hogs not only survived, but multiplied abundantly. (Those hogs, by the way, became ancestors to the modern "razorback" and "piney woods rooters" wild hogs in Arkansas and Louisiana, respectively.)

Early Catahoula Lake settlers and early incarnations of the Catahoula Leopard dog began to work in tandem, capturing wild hogs and cows, which were soon to be domesticated animals. The dogs' skill at managing stock is unique and a wonder to behold. In effect, they provide "dog fences" around the stock they are herding, and then hold them at bay until the master arrives to tell the dog what to do. Catahoula Leopard dogs remain prized for their ability to manage both domesticated and wild hogs and cattle.

What sets the Catahoula Leopard dog apart in purity of breed is not the way it looks (which can be varied, because of its multi-breed background), but in its ability to herd stock. Today, in addition to that skill, they're also great at hunting black bear, raccoons, mountain lions, squirrels, wild pigs, or deer.

Notably, such historical figures as Jim Bowie and Teddy Roosevelt were fond of Catahoulas. Louisiana Gov. Earl K. Long also had a fondness for Catahoula Leopard dogs and actually collected them. The Catahoula has been the official state dog of Louisiana since 1979.

Lines of Catahoulas
The Catahoula had three original "heritage lines." The Wright line was the largest, with dogs weighing between 90 to 110 pounds, and was a direct descendent from the original Desoto dogs. The Fairbanks line weighed between 60 and 75 pounds, and was generally brindle or yellow in color.The McMillin line, or the so-called "blue Catahoula," often had the aforementioned "glass eyes" and weighed between 50 to 80 pounds. Today's dogs are products of interbreeding between these lines to produce the wide variety of Catahoulas' appearances today, with the lines no longer disparate.

Appearance
Catahoulas vary both in size and appearance, with males larger than females; standing height at the shoulder is between 20 and 26 inches, and the weight is between 40 and 90 pounds. Because of their varied heritage and genealogical background, your pet's appearance is not really standard; one Catahoula can vary greatly in appearance as compared to the next.

Coats can be many colors, and patterns: with a base color and contrasting spots; solids with a single coat color; brindles with a dark or light base coat color with contrasting stripes; or patchwork alternating colors. The coat itself is short to medium length, and lies flat, close to the body, either smooth or coarse.

The eyes of a Catahoula are very interesting, indeed. They can be what are called "cracked glass" or "marble glass" in appearance, meaning that both colored and blue or blue-white irises may be present in the same eye. Eye colors can range from blue to brown to green to amber, even gray.

The tail can be either a long, whiplike tail or short bobtail. Their feet are usually webbed, which makes them great swimmers.

Personality
The Catahoula is a loving, protective family dog, although males can be aggressive toward other dogs. They are excellent as working dogs, meaning that they really like to have something to do, especially related to "herding" or "tracking" games. They're also very good watchdogs, so they make wonderful guard dogs, as well. They do need to be socialized early on and to be given a firm hand, or they can become "alpha" dogs, and think that they are in charge. Your pet will be loving and obedient as long as he knows you're in charge, although you should never, ever isolate your dog. He or she needs to be around you and other pets you may have, all the time. It's best to begin socializing puppies as early as possible, so that they get used to being around you.

If trained properly, though, your very intelligent Catahoula who has lots of energy, will be very serious about the job you've given him, whether that be as guard dog or as some kind of work related to herding.

Proper Environment
Your pet makes a very good family dog and is good with children with whom he is familiar, as long as he has been acclimated to them from an early age. These dogs can be very suspicious of strangers, so it's not a good idea to leave them alone around children they don't know.

The Catahoula itself is quite a "mixed breed" heritage, meaning that personality characteristics are not entirely fixed. That means that some dogs will do well in apartments, while others will need lots of room to run and play. Again, your pet absolutely must have interaction with you and your family, as applicable, on a daily basis; do not leave your pet alone.

Health
Catahoulas are prone to deafness and hip dysplasia, but they are relatively healthy dogs considering their varied background. You can generally expect your pet to live about 12 to 13 years.

Grooming
Grooming for your pet is easy: a semiannual bath and regular brushing twice a week is enough.

Colors
Ranging in color from red, blue, yellow, and even tan or white colors.

Living Area
The Catahoula Leopard dog breed is best suited to the country, or to living on a farm in order to run and explore during the day. Living in an apartment or suburb is not only dull for the dog, but it can also cause them to act out their boredom.If this dog breed does need to live in a smaller area, they will require a lot of attention and ability to get out to burn off their excess energy. Try schedule time away every day to make sure this dog is happy and content-or you may find that your home or yard has been damaged from the lack of attention.Ideally, the Catahoula should be able to have a set pattern of work chores to do each day so that they can fully utilize their intelligence and their energy. These are dogs that work well to herd cattle and to manage other animals on a farm.This is not a dog that you can leave alone during the day or leave outside chained to a pole. This is a dog that needs to be played with regularly, needs direction, training, and some sort of goal in order to be kept happy.If you leave this dog outside during cold weather, they will need a heated dog house and sleeping area as their short coat doesn't protect them from the elements as well as a longer coat might.